HOW AGUER PANYAANG HAS BEEN ‘NGAANG’: HALLOWED WITH A HOLLOW DEAL!

“There is something call community based approach. We shall sit with the community and decide the priority for our people. Is it road, health centre or school?” Col. Philip Aguer, the newly appointed governor of the newly decreed Jonglei State, has spoken out his very sound but bookish plans.

And that is why I have kept it low from speaking out my mind raw on this 28 states’ saga as late as on the 28th day of December, which I hope will be a different story on the 28th day January, 2016. Don’t say I didn’t tell you as usual why a popular idea of 28 states will last 28 days! 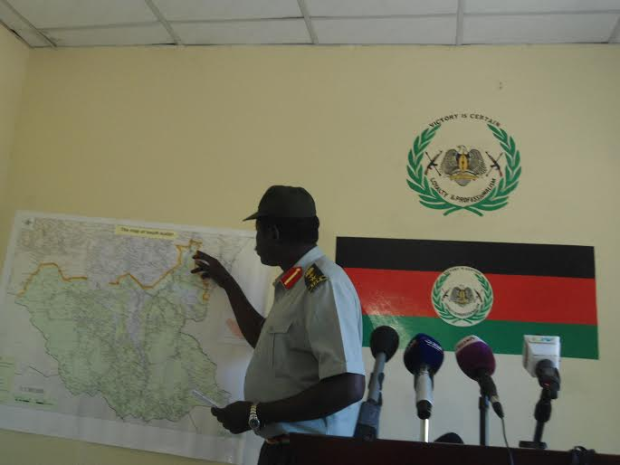 However, I got exactly the same plans when I interviewed Governor Philip Thon Leek for ‘The Southern Eye Newspaper’ 14 years ago, then Governor Kuol Manyang for my magazine 5 years later. What happened? No political will to fund those projects from Juba by the time 1 dollar was trading at 2 SSD? So the talk of taking towns to the villages today is but a political gimmick to divert the attention from the government-threatening peace agreement with a poisoned chalice contained in both ARCISS and AUCISS documents!

Then, also this. “I met Baba Beda Konyi [nominated governor of Boma state of Murle tribe] and James Kok Ruei [governor Western Bieh state of Nuer tribe] today (Friday) on how to live peacefully,” said Col. Aguer in an interview to the Australian-based SBS Dinka radio programme aired on Saturday.

So my friend, Col. Philip Aguer Panyang, has just talked to his Juba-bound colleagues of James Kok Ruea  and the Bor-bound Baba Medan and not yet the people I met in Raprap and Walgak in 2012…and we just jump to celebrate and announce the end of cattle raiding and child abduction from that speech? Who said those ‘bushmen’ read Sudan Tribune? We need a lot of work, not job-lobbying congratulations and celebrations. Philip Aguer Panyang is the man worth working with, not by lobbyists but real action takers. 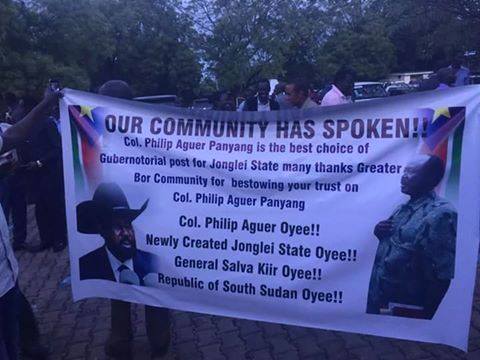 None has actually seen the new problems this more ethnically factorized ‘kokoraism’ entails: border disputes and tribal isolation! To my early observation so far, the preemptive action of decrees and orders by the president against the ARCISS (Accord for the Resolution of Conflict in South Sudan) is so unprecedented that even Omar al Bashir had never done it during the hardest pushed implementation of the Sudan Comprehensive Peace Agreement (CPA).

Before I proceed, this note should not be taken biased by the reader. I am not against the people’s federalism. I am hot against political feudalism: this baited appointment of leaders – governors and parliamentarians – so that if they do not serve their people ‘kiiritically’, they could indefinitely be replaced with more permanent caretakers as has been the case. I am the same person insulted for supporting federalism here last here by the same ‘Kiiristians’ who follow and flow with his political mood swinging.

We are just asking, “So what is the job of the incoming Ministry of Federal Affairs that would be sworn in under TGoNU in January according to the agreement?” Why this breakneck speed when we have and own our nation and would just do whatever we want while relaxed under our umbrella of National unity through this peace? As observed elsewhere, ARCISS was unilaterally dissolved the evening of December 24 when the 10 states were dismantled and the 28 launched…launched on SSTV, yet to appear on the ground!

Otherwise, these mass appointments and dissolution of 10 states decree hurriedly squeezed in just a few days to the inauguration of the new Transitional Government of National Unity (TGONU) smacks of sinister motives, which will hurt this already ethnicized new nation tremendously. With the ARCISS based on 10 states, any unilateral, bilateral or multilateral act that dismantles the current national structures of administration is the dissolution of the jointly signed peace agreement, itself. Some jobbists or position lobbyists would shrug these facts off: “After all, we have our own state…”.

But what will my Jonglei State benefit me if Bieh or Wau is burning, or when I cannot live in Nimule or use Yei road, being from Bor? I thought we have learned from Bashir’s experience during Garang’s war; when the Southern states and governors were city-based as the war ragedin their own states. Let Kok Ruea try this in his newly decreed Western Bieh State! I mean, peace is the priority, then later we can do whatever we want with whatever we own in peace and harmony.

By the way, who said Col. Philip is a jobless opportunist, who could just be swung in at a critical  time of national repair and recovery as such? Even 30 months later, this gentleman could still make it with our unwavering support as he deserves it beyond any resonant doubt. And our Bor’s own Jonglei State is ours and will be there till the world ends. So why seem to donate it to us from Juba in such a breakneck hurry?

Plus, I told my former Jesh Ahmr colleague yesterday to be ready to pack his baggage minus his bungalow and the shop and leave Nimule once the euphoria of this political baiting with 28 states are over. And he frowned, “Really! Why?” That is what Kiir has not told him, besides his desperate job creation and legacy repair last-minute struggles (by offering the people their own states);   just to divert public attention from the Dollar-versus-Pound starvation and accommodate the excess work force he is at risk of losing to the opposition after relinquishing half his current government! No calculation about the negatives. That taboo (criticism) is for those of Jon Pen, the ‘rebels’!

However, as Niccolo Machiavelli once once put it, “the ultimate truth is penultimately a falsehood”, or what is seen to be wrong by the majority in the beginning turns out to be the truth at the end.

So my solace lies in the reality that I suffer the counter blame of my criticism on our nationally collective concerns alone but we all eventually shoulder the result of our previous blindness together. For example, not to mention of the Yau Yau war that made me such a refugee, we warned of how the current war of greed was being manufactured in early 2013, but majority of today’s sufferers labeled us ‘stupid prophets of doom’. Now we feel it together! And the most painful part of this tragedy is that they do not, or just refuse, to learn from the past and forecast before they focus on such misplaced priorities as the federalism of the 28 states in the  way of Peace. 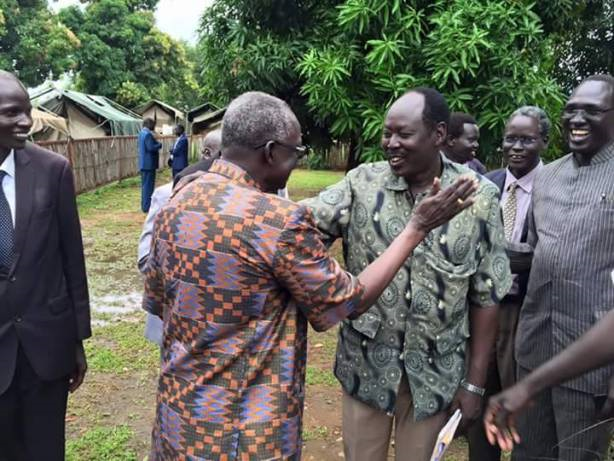 CONGRATULATING THE MAN OF THE PEOPLE, BY THE PEOPLE AND FOR THE PEOPLE…

Wait and see. But my heart bleeds over “Ke yen e koc pieth cit yii Aguer e Panyang ngaang!” In the Bor Dinka dialect, ‘ba raan ngaang’ is to offer someone an empty gift. So the so-called 28 states governments or governors’ positions are just a hoax for temporary psychological mass massage, right? I mean this haphazard, say, half-hazard rush may result in a crush and then the whole thing withdrawn or revoked shamefully in the end of January or February for renegotiation upon implementation of the ARCISS agreement based on 10 states. Just wait for the JMEC and international community’s reactions in addition to the local opposition and civil society’s. This is not doomsaying, per se. That is only when we want to stop the war. Why?

The violation decree is a hundred per cent unilateral; even the share of the main partner (SPLM-IO) is greedily usurped and used up by the presidential decree! And we clap ‘epatpat’ to His Ex-cellency’s kingly decrees and orders as usual! Wadioww, South Sudanese are politically duped and ethnically doped by the leadership in an experimentation of prolonging their stay in power at the  cost of their poor masses’ lives! When a leadership maintenance runs on innocent people’s blood, it is a curse. Only a nation’s liberation could be such costly but with limited regrets as during our John Garang’s war.

MY STAND ON THE NEW STATES…
Don’t think I don’t like my new Jonglei State. What I don’t want is why somebody is threateningly ‘selling’ it to me while it is originally and already mine. Why should the Bor folks believe somebody has given them their own state…From where? We have already had it and owned it especially after liberating it from the Arabs. So why should it cost us under a politically cannibalistic system this hard-earned peace and unity? We all know but hypocritically (say ‘hypokiiritically) ignore that our state’s process will be launched in less than a month and fully established within less than the next 30 months through proper boundary demarcation, proper human resource recruitment, proper natural/economic resource allocation under the generally agreed type of federalism, not the current Kiir’s political feudalism i.e. not by an imposed impromptu decree and order!

In conclusion, this piece of mine for the peace of this solitary mind is not comprehensive. It does not cover left and right all that is to do with the dictated orders and decrees, if any. If this were the case, I would have dwelt on why the decree is misogynistic (anti-female gender) or all the 28 governors being male, almost all are militaristic (most governors from the army), all the 28 being unilateral (SPLM-IG), and why the whole idea is being claimed by the JCE, which is predominantly one side of the tribe, comprising Juba-based jobless political dinosaurs (retirees), etc. Why, if a people’s demand, is it being imposed until some lawmakers are sacked from their juicy positions for being politically apposition. So this is our post-independence South Sudan, ha?

“The victims of yesterday are the perpetrators of today…” Letter to President Salva Kiir by the ‘Friends of South Sudan’ in 2013.

Shame on us for adopting the Jallaba system for our greedy political survival again!

← EULOGY TO GEN. KUOL MALITH: You founded for me a family and a nation!
CHRISTIANITY VERSUS ‘KIIRISTIANITY’: Kiir is neither GUILTY nor INNOCENT but ‘INNU-CENT’ on 28 States! →