HOW KENYATTA LESSENS THE ICC IMPACT WITH FIVE LESSONS TO AFRICANS 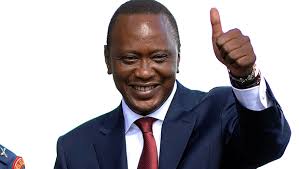 Lesson 1 of this piece of live history must come from the life story of a man whose vision was so much criticized and the mission so much politicized to the extent that he was frog-marched to the gallows with his cross on his shoulder; or say, to the Calvary by the cavalry. This is not Uhuru Kenyatta but Jesus Christ! “It is not everyone that says to me, ‘My Lord, my Lord’, who enters the Kingdom of Heaven, but whoever does the will of my Father who is in Heaven.”

Similarly, it is not every African leader who is flattened under the critical yoke of democracy but flattered with hypocritical title, “His Excellency, Her Excellency”, who eventually enters the ‘Kingdom of Democracy’, but those who do the will of the people of their nations.

It is a fact not to be disputed that this geographical chunk of the earth is full of the political skunks of the world, who have made their people (the Africans) the scums of the earth. The tragedy is that it is at the point when the Africans are emerging out of the colonially dark continent that they are now made to suffer under the load of domestically powered struggles. Alas, as one writer once put it, Africa is cursed with too many leaders with too little leadership!

However, some hope is raised when some leaders sober up from their political dope and supposedly put their people first. One of them is the Kenyan statesman who made a bold statement yesterday (October 6, 2014): “I choose not to put the sovereignty of the Kenyan people at stake.” This made my day. It made it this year because last year (2013), he spoiled my day when he (Uhuru Kenyatta and his deputy, William Ruto) squeezed themselves into the peoples’ power while dragging shackles of post-election violence shambles. “Give us the power first.The Hague case is our personal problem,” they jointly declared on their campaign trails. And now they seem to still maintain their promise, or compromise. The promise is that the crime they are answering in the world court at The Netherlands is as personal as their salaries. Well, it is yet to be seen.

African Union’s heads of state in an emergency meeting to save their leadership and shield themselves against the ICC threats.

As a lesson to those African dictators who had volunteered to go and be his spectators at the public gallery of the International Criminal Court in The Hague on October 8, Uhuru Kenyatta has done the needful.

One, he has demonstrated to the people that the charges were pressed against him in 2010, when he was a Kenyan citizen, not a Kenyan president. By this, he had to lay down the state’s apparatus and head for the court as a ‘Mr. Kenyatta’, not ‘Mr. Kenya’ as the Musevenis and the Bashirs, or the Bashar al Assads of Africa, had wanted him to do.

This is why I applaud him. Instead of that amorphous ‘sovereignty’ cry of African leaders…, “I choose not to put the sovereignty of the people of Kenya at stake”, he told the regional leaders without mincing his words. And they, who wanted to use him as an ‘impunity bomb’ to the world criminal court, are now left with no other option but to lick their wounds and call for another round of strengthening IGAD or AU summit to reinforce their ‘immunity by impunity’ laws barring any sitting African head of state from being taken to ICC. Uhuru has broken that record if at all he is not going to surrender to his counterparts’ selfish ‘Sovereignty Solid-arity’! So for this reason, Kenya karma can even reward him with another term in office thereafter, though I do not subscribe to this bloody African power ‘eternity fraternity’.

Yes, Mr. Kenyatta has ‘betrayed’ his comrades but not heeding to their request to make him dodge the court, but by the end of the ICC’s status conference in the evening of October 8, just imagine the heroes well awaiting his arrival all the way from the court’s exit in the Hague to his Kenyatta International Airport in Nairobi.

In deed, this turn of events has left a bunch of our bloodstained heads of state with blood-tainted legacies with no choice but to go back to their messy cities or lay down their crowns and accompany their ‘brother’ to the Kingdom of Netherlands as ordinary Africans, a miracle that could happen only in AD 6, when somebody offered his everything but life in exchange for the lives of his friends. Of course, not so many ‘Jesuses’ can do that, nowadays. No, not in this Africa full of the people’s ‘Judases’, who resurrected even over 2000 years later. It is this resurrection of the political Judases that is to blame for so many insurrections in Africa today. If it isn’t, then what is it? Do not tell me it is Khawaja or mzungu interference, while we all know how to keep away vectors from bringing us diseases, unless we have employed quack doctors.

The third lesson is in his fear for the law. As I am typing this sentence, I am reading another court sentence to another accused Africa leader, with this headline across the world press: “ICC asks Saudi government to arrest Sudan president during pilgrimage.” In 2009, the ICC issued two warrants of arrest against President Omar al Bashir for allegedly committing war crimes, crimes against humanity and genocide in the Darfur region. The arrest request (not order) to the Saudi Kingdom reads.

“On October 1, 2014, the Chamber received a notification in which the Prosecutor avers, on the basis of news reports, that Mr Bashir ‘arrived in Saudi Arabia on Tuesday, September 30, to perform the annual hajj (pilgrimage),” the ICC explained. “Accordingly, the Prosecutor requests the Chamber to take steps to ensure that the warrants of arrest issued by the Court against Mr Bashir are executed,” it further said. But why Bashir has never been apprehended, including his forcibly possible visit for the promulgation of Kenya’s brand new constitution in Nairobi in 2010, is now another lesson to be learned by the West-based international court. Could Omar al Bashir’s blatant visit  to launch Kenya’s new constitution cast a bad omen to Kenya’s future of violation of own laws?

Back to the lesson on the problem, which is lessened by fear for the law, or, call it, respect for the rule of law, the dilemma is twofold here. If the president refused to attend the ICC case, the court would issue the warrant of arrest like on Bashir, making Mr. Uhrur Kenyatta the second African leader to become ‘president of internal affairs’, as he would be avoiding some ICC-membered countries and confined to certain routes or his home affairs.

Secondly in the same point, since the ICC is domesticated in the Kenyan constitution as Kenya is a member of the Rome Statute into which the The Hague-based jury is anchored, the very vibrant civil society, the competent opposition and the powerful media, which command the people of Kenya, would force the president to do so, or not to do so at his own political peril.

Here, the very victims who are killed are the very ones who are used to defend the killer leaders with bloody hands. Reason, ethnic allegiance is superior to death in our African political playground.

Maybe, vaguely, Mr. Kenyatta, having boldly frustrated the ICC through intimidation of bribing out of critical witnesses, is confident of no danger, hence, has chosen to pull a political stunt (or is it a stand?) by going there as a villain and returning here as a hero. Let’s watch and see the scene the political son of a legendary founder of a Kenya nation will cause upon his return to Nairobi 48 hours later.

Lesson four: Political hypocrisy: “I choose not to put the sovereignty of my people at stake,” claimed Mr. Kenyatta. Good statement, alright. But, wait a minute, how about the case that caused the charges which are taking him to the Hague today? In other words, the post-election deaths of 1,133 innocent Kenyans and displacement of over half a million others, who are languishing in the IDP camps to date? Hypocritically, this smacks of African leaders’ pretense. This hypocrisy, which I call ‘HypoKiirisy’ when talking of my home politicians and politics championed by Gen. Salva Kiir, similarly declared thus: “I will not take my people back to war.” And immediately, Salva Kiir’s people were in war barely three hours after that statement during the fall out of the reconciliation conference whereby he kicked the dust off and up by his inflammatory speech and derogatory revolutionary songs at the peace venue in the capital, Juba.

President Kiir, now Gen. Salva Kiir Mayardit, in a press conference in which he announced that the ‘coup d’etat’ was foiled and then the arrest of those behind the coup (SSTV. Dec. 16, 2013).

President Uhuru Kenyatta jumped into a military gear after IGAD leaders colluded to frustrate South Sudan peace process and instead send their armies there to keep peace in August 2014. He launched the training of special East African Standby Force in August.

In this conclusion, which makes and marks the 5th lesson for African leadership, ICC is wasting the time of Africans. In my president’s words (of Salva Kiir) in the AU’s 50th Anniversary in Addis Ababa, 2013, “ICC should not be allowed to humiliate African leaders.” Is it? And if it isn’t so, then why does the so-called International Criminal Court, or their like, watch the dictators butchering their people to personal submission, allow them to ascend to the throne, and then claim belatedly to take them to the courts alive, to answer charges on the intentionally planned program for the eventually executed pogrom on their innocent populace?

By the way, was it not the Kenyan parliament that used to chant in 2009, “Don’t be VAGUE, go to the HAGUE!”? Now, what is their new song after their fellow politicians have thrown themselves onto the top throne of the nation? “Do be VAGUE, Go NOT to the HAGUE!” This can now be seen in the weaknesses of the ICC witnesses allegedly blamed on bribe, tribe or threat from the ‘UhuRuto Administration’ in Kenya,, according to ICC’s chief prosecutor Fatou Bensouda.

To finally drive the point home, do you ever think the South Sudanese political duo of Kiir Mayardit and Riek Machar’dit’ will ever face similar challenges from the charges of the thousands killed and millions displaced upon their power prowess that has given birth to the bloodbath fuelled by wrongly ethicized ethos on ‘ethnicized’ egos? No, I do not think so. As long as I am an eyewitness to the sluggishly ongoing peace process in the hands of the said African leaders, some of whom are in the ICC dock, the people of South Sudan will never make their leaders face justice and accountability so long as these despots continue to pace up and down the corridors of the people’s power.

So help us God!

← PART III: THE DAY ANTI-TANK LANDMINE FAILED TO BLOW DR. JOHN INTO PIECES!
THE FACE FOUNDATION: The education foundation of some best minds! →