Death has robbed me (and Africa) of my best friend, Sam Loco! 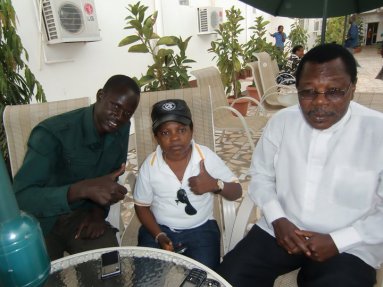 Why after the independence of South Sudan? Why when we needed role models, mentors and actors in the film industry, which is pregnant of our virgin history?

For those who might pull faces of what I am mourning about and who I am mourning for, he is Sam ‘Loco’ Ifeanye, the best Nigerian Comedian who almost acquired a South Sudanese citizenship if he had first taken permission to come back after July 9. I missed him. We miss and will miss him. He had a big promise for us.

No, not after a promise, a promise to raise local talents to excavate our dying history into another ‘Nollywood’ in the continent in the name of South Sudan, or can I say ‘Ssollywood’.

I met Mr. Loco, a very vocal artist, who I right away nicknamed ‘Uncle Sam Local’  (and during my emceeing him as ‘Unco Loco’) after he easily integrated into our South Sudanese life, unlike my younger bros, Chinedu Ikedieze and Osita Ikeheme (Aki na Pawpaw) who did not promise any coming back even after we celebrated the birth of our ‘Baby Nation’. Maybe because they were harassed and embarrassed at South Sudan Hotel and Airport (as we were forced to use Ordinary check in as some minister ‘nigger’ sons and daughters were breathing aircon in the VIP lounge!). In spite of that, Sam promised me to come back again and again to train local South Sudanese how to do it the Naija way. In fact, when he left Juba for the second time just a few weeks before our July 9, he was counting down on our Grand Birthday. Alas, he was counting down on his ‘Grand Death Day’ (Rest in Peace, Unco Loco)!

The first time I met Mr. Local and gave him that name was June last year (2010). I had a privilege of running their shows as an MC (Master of Ceremonies) for three days in many venues of Juba. I was amazed at how talented and experienced this old man was, especially when, during our name-game, he crammed my mine in his olden head but golden mind and used it in his comedy on the stage at Home-and-Away Centre. My friends and fans could not believe how fast this 66-year old down-to-earth standup comedian could fore-learn from things of foreign land.

One thing I would not forget about him and his comedy is when I took them for exiting at Juba Airport (he told me not to use the world ‘International’ for our airport), especially when we were expelled from the VIP lounge to the ordinary Departures’ section. Especially when we had entered and seen some minister’s nigger sons and daughter breathing that heavily mist-laden aircon VIP lounge. He protested the security check conducted by a male police officer at the ‘vip’ shock point (vip: very insignificant people). On seeing a female police checking other female passengers the other queue, he jumped up on this man, “What’s wrong with Southern Sudan!”, he exclaimed and claimed, “What is wrong with this man? I am not a gay oooo! How can a man search me down to my ‘gologo’?” To the naïve Sudanese amazing or disbelief, he requested one officer to allow him “be checked by that beautifully inviting South Sudanese girlfriend of next time’…as he used to refer to our charming ladies after our culture orientation on them to observe Jesus’s principle: ‘Don’t Ogle, Don’t Google’!

With mixed reaction, I announced that he is not a drunk or drugged or mad man, “He is Sam Loco, the Nigerian actor that you always see on TV.” As everyone began to rush for him, we were no more. When I returned through the same door, I faced it rough for letting them disappear before the Jubans caught their hands. “Problem with you our homeboys is you feel so proud for nothing. Why didn’t you allow us to greet them?”, protested one female Khartoumer-turned-Southerner. But that’s why they were meant for VIP, which was overcrowded with daughters and heavily dreaded sons of South Sudanese generals, director-generals and the likes. God knows if such characters are more VIPed than the top world actors of Africa. I am yet to ask more about this incident from our airport authorities or our ‘foreign’ minister in Juba.

The second fun South Sudanese will remember Sam Loco of was when his 20-year-old belt got cut as he entered his South Sudan Hotel room, and he had to rescue his pants knee-high distance. He said, “Sorry, this is the belt I bought during my wedding, and now that it got cut in South Sudan, it means I have to wed again, but only for nights I am going to spend here.”

The third one-minute comedy the Late Loco played with my involvement was when Mr. Aki (of the Baby Police) and himself went for an Afternoon Mix Down interview with Maal Maker on Miraya FM. When the whole UNMIS gang learned that they were the Naija boys (including Sam), they caused a human jam on our way out of the studio. In the process, Maal Maker knocked Aki’s head with his knee when he jumped over to have a picture. On seeing this drama which kinda irked Ike (Nedu), Sam whispered to me, “SHsssssss! Don’t tell him it was his knee, tell him (Aki) it was his elbow. Or else he will ask to be carried on your shoulders next time!” And before we burst into that laughter, I had jumped to comfort (rub) his head to soothe the paining spot our South/Sudanese way, to which Aki screamed, “Why you deh slap me!?”

Those, plus several other jokes he made on the stage at Home-and-Away, Nyakuron Cultural Centre and South Sudan Hotel (Africa Park), plus the thousands he had promised to train us on after independence, will be missed by all of us, me most! RIP Unco Loco!

The Delta State Commissioner for Culture and Tourism Barrister Richard Mofe Damijo said the death of the man who inspired him to study theatre arts was a shock and was surprised that “he had gone so soon. He was a fantastic talent and a detribalised Nigerian and a true Bendel man, He will be sorely missed. ”

RMD said he was glad to have shared the stage with him on a few occasions and he particularly influenced his decision to go into theatre.

He helped to propel my art –Charles Novia, actor and producer.

I grew up in Benin City, watching Sam Loco on television. He played the role of Chief Ukata Bribri in a popular tv series ‘Hotel de Jordan’. His acting prowess over the years helped propel my art today both as an actor and producer. I’m sad I never got the chance to work with him but his work in Nollywood and on television leaves a rich legacy for many generations.

I’m in shock, after Christy Essien passed on, I do not know what is happening in the entertainment industry. We are yet to ascertain the cause of Sam Loco’s death.

I just heard the news, and I have been trying to get his relatives to confirm whether he is in coma or has passed on truly. I feel so bad because , we just lost Christy Essien some months ago.

← COMMANDER-IN-SHIFT: Gen. Gatdet Jets In For The Umpteenth-Time Defection In History!
Problem with Kiir’s decree is not the sacking, it is the backing. →

One thought on “Death has robbed me (and Africa) of my best friend, Sam Loco!”